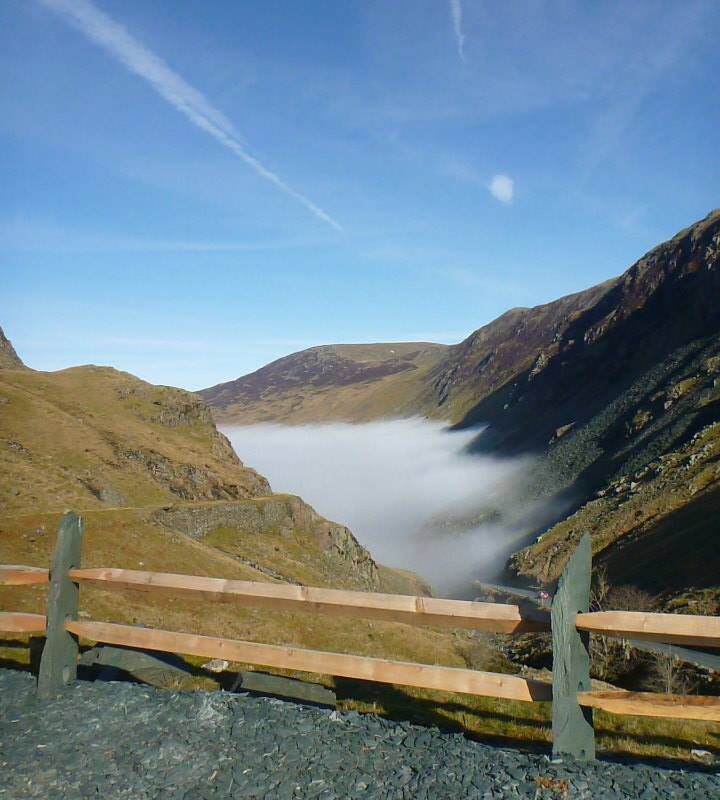 This is one of the most unusual ways to climb a mountain and with three options of difficulty, there’s a route for everyone.  Via Ferrata Honister is the go to adventure in the Lake District National Park.

Via Ferrata means “Iron Path” in Italian, they were first used in the nineteenth century most notably in the First World War for moving troops over the Dolomite mountains.

One of many wire bridge challenges.

So what does it involve? Basically, traversing a mountain from bottom to top on a route made up of ladder rung cliff traverses, rock climbing, cargo nets, scrambling and wire bridges, .  The whole route has a safety wire which you use to make sure you are attached and safe at all times.  The safety system is similar to tree top adventures and high ropes courses, easy to use and super safe. After a thorough safety breifing and practice run, one of our guides is always on hand to supervise and make sure everyone in the party is operating safely an enjoying what is, one of our most popular activities.

With three routes, there is one for everyone.

With three different options there is a chance for everyone to be involved.  No matter how adventurous, we are confident that you will enjoy one of the via ferrata routes at Honister.

A full on exposure fest, big routes across the face of a mountain, you will be exposed to the elements like never before.  Traversing gullies, huge cliff faces and massive wire bridges gaps and culminating in a massive cargo net  If you want an adrenaline fueled adventure this is the one for you, this high and exposed and not for the faint hearted.  To top it off we finish on a high mountain plateau (over 2000ft) with beuatiful panoramic views of some of the biggest peaks in the lake district.

Here is little snippet of what is involved:

Don’t worry though if you take it on and decide it’s not for you, you can always escape on the classic route and still have a good challenge to the peak.

This route is more of a scramble, still with use of the ladder style sections it is a good route for those who aren’t as good at height and it is not as physically demanding.  Most ages and abilities can take on and conquer the classic. The route follows the old track that miners used to get slate on and off the mountain.

After scrambling up some pretty amazing sections and stopping for a breather at times you head through the last dark tunnel and arrive at the top of the mountain.

Route 3- Climb the Mine

Climb the Mine is a cool combination of mining and caving into the world of via ferrata, using similar safety lanyards and under torchlight you travel around some of the 19th century mine working.  Traversing huge cavern walls, ladder bridges and old ventilation shafts, the atmosphere is very  unique and one not to be missed.

After completing what inside the mine has to offer, we then head up on part of the classic route to the top of the mountain.

The ultimate combo is climb the mine and the Xtrem route, five-six hours both inside and outside conquering some of the most demanding via ferrata in the UK.  One not to be missed and only for those who have a solid level of fitness.

Get in touch for great group rates, as always we provide transport from Newcastle in with the price.  We can meet you in the lake district too at a reduced price per person too.   You can fond out more on the Via Ferrata section of the Endless Adventure North East website here.

Find out more by contacting us here.

See you in the mountains!